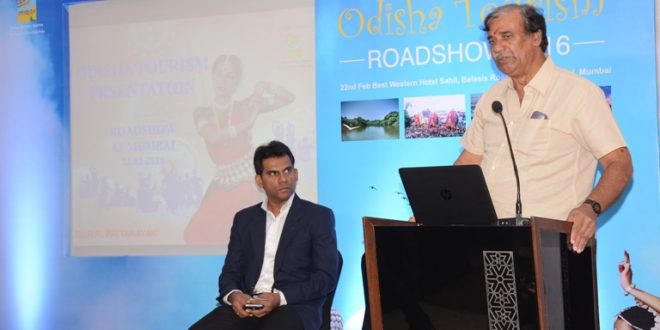 BHUBANESWAR: With the objectives of promoting the tourism products of the state in the western part of India, Odisha Tourism on Monday organised a road show at Mumbai.

This is another initiative to attract domestic tourists from an important source state and commercial capital of India.

Tourism Minister Ashok Chandra Panda emphasised on the promotion of Odisha tourism products through sincere efforts of hoteliers, tour operators and other stakeholders.

Panda said that Odisha is a tourists’ paradise and has many stunning destinations which offer a visual feast to the tourists and visitors.

It also throws an educative and culturally pleasing insight into one of the oldest civilisations of the world. The road show will benefit and provide information on Odisha Tourism to the tour lovers, tour operators, travel agents, travel writers, journalists, decision makers, etc., he said.

Travel to Odisha is truly an amazing experience that attracts people from all parts of the world for its sculptural and artistic heritage. The Sun Temple at Konark, a UNESCO Heritage site, the temple of Lord Jagannath at Puri, one of the four cardinal centres for Hindus (Char Dhams) of India and temple city of Bhubaneswar are important and popular tourist destinations.

The Buddhist heritage of Odisha comprising of Ratnagiri-Lalitgiri-Udayagiri-Langudi and Dhauli attracts tourists from overseas and domestic front.

The rock-cut caves of Khandagiri and Udaygiri at Bhubaneswar depicting Jain Heritage throw ample light on the magnificent past of Odisha. Chilika, the largest brackish water lake in Asia and a Ramsar site of India with 1100 sq.kms area, is famous for Dolphins and migratory birds.

A progressive and investment friendly Tourism Policy has been in operation since 2013. As per the policy, a State Level Single Window Committee has been created for the speedy implementation of the projects; several incentives have been announced for the Tourism stakeholders as part of promotional initiatives.

In August last year, the Light and Sound Show has been started at Dhauli and to follow in at Konark and Khandagiri-Udayagiri, said Sri Panda.

Odisha Tourism to attract domestic tourists from various parts of the country is holding road shows in different cities. It has already organised various roadshows last year and this year 10 Roadshows will be organised at different places of the country, said Nitin Bhanudas Jawale, Director, Tourism.

It is a happy coincidence that one of such road show is being organised in this great city of Mumbai.

Odisha Tourism Development Corporation has also been playing a key role in the promotion and development of Tourism in the state. It covers a wide range of facilities to the tourists & visitors with its 22 strategically located hotels and restaurants with fine Odia delicacies, boat riding in Chilika Lake, tour & travels and transport facilities.

Above all Odisha is a peaceful state and the people are hospitable. The state capital Bhubaneswar is a modern city having good connectivity (both rail and air) to all major cities of the country.

The Airport has opened to the international sector and will definitely give a surge in tourist traffic, said Jawale.