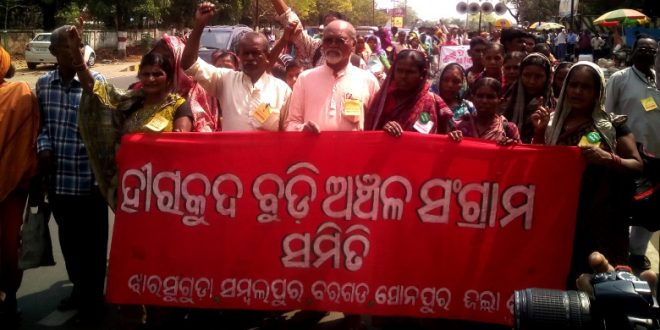 BHUBANESWAR: Hundreds of Hirakud Dam-displaced families from Jharsuguda, Sambalpur, Sundargarh, Bargarh and Sonepur under the Banner of Hirakud Budi Anchal Sangram Samiti(HBASS) took out a massive rally on the Mahatma Gandhi Marg here demanding fulfilment of their long pending demands.

They, in a memorandum submitted to the chief minister, alleged that even though the state government promised to provide ten decimal homestead land to displaced families in Rengali and Jamimkera Tahasil of Sambalpur district, it has failed to issue the same to displaced families of Jharsuguda and Sundargarh districts.

The outfit said that since very few displaced families have the prescribed evidence of displacement, the recommendation of the concern Palli Sabha and Gram Sabha should be taken into account for the identification of displaced families and eligibility to get ten decimal of homestead land Patta.

They have also demanded to expedite the survey and settlement of 34 un-surveyed villages lying above 632 R.L of the Hirakud Reservoir as per the decision was taken in 2002 and 2011.

Gopinath Majhi, the general secretary of the outfit, said, “Early payment of exgratia compensation @10.000 per acre should be made to displaced families of Jharsuguda, Sambalpur, Sundargarh districts as per the government decision.”