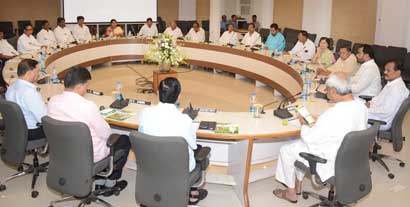 BHUBANESWAR: The Odisha Council of Ministers on Friday approved the budget for 2016-17 with a focus on agriculture, health and education.

The source said the budget size might cross 94,000 crores. This includes Rs 45,000 crore of Plan expenditure and the rest Non-Plan spending.

While the budget session of Odisha Assembly will begin from March 15, the state budget is scheduled to be presented on March 18.

After the centre reduced allocation this year in its budget 2016-17, the state government is under pressure to allocate more funds to the priority sectors. Besides, the centre has stopped several schemes and slashed shares to several other schemes putting further burden on the state government to run the schemes on its own fund.

To overcome from the fund crunch, the Odisha government is most likely to for higher borrowing this year. In FY 16, the state government set borrowing target of Rs 12,000 crore and has already borrowed over Rs 6000 crore from the open market through the sale of government securities.

The state government will also present a separate agriculture budget this year. This will be for the fourth consecutive year. On Wednesday, the chief minister said that agriculture sector would be given priority while budget allocation would be enhanced this year.