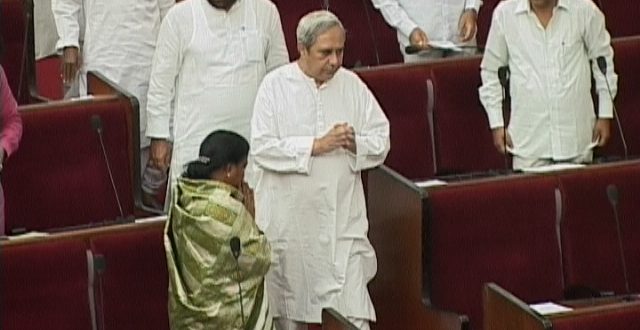 BHUBANESWAR: As expected, the budget session of Odisha Assembly came to a premature end with both opposition and ruling party blaming each other for stalling the house proceedings.

The second phase of budget session almost washed out following ruckus by opposition Congress and BJP and ruling BJD over various issues including alleged involvement of ruling party leaders in the chit fund scam and transfer of money to BJD’s bank account.

Chief Minister Naveen Patnaik said it is most unfortunate and a matter of serious concern that the second phase of this important budget session was continuously stalled by opposition affecting the interest of people and the state.

“My Government and my Party always believes in the highest traditions of parliamentary democracy, took all initiatives to reach out to the opposition to restore normalcy and get into a serious legislative business. I also personally took initiatives to restore normalcy in the House. But the opposition did not cooperate and continued their obstructionist attitude for narrow political agenda at the expense of the larger interest of people of our State,” said Patnaik.

Everyone has a right to speak on the floor. But that should be permissible within the precinct of law and legislative rules, norms and practices. What is most unfortunate is that the temple of democracy was used as a forum for agitational politics in spite of its explicit prohibition in legislative rules, he added.

“People have voted us to this august house to discuss and deliberate their issues and legislate for their betterment. The time has come for serious self-introspection by the opposition. The competitive politics of Congress and BJP to occupy the space of number one opposition is responsible for this state of affairs. I expect and appeal to the opposition to be more responsible in future and work in the greater interest of people state. After all, people are watching who is doing what,” said the chief minister.

However, Leader of Opposition Narasingh Mishra attacked the ruling party for choking the voice of opposition on the floor of the house by not allowing them to raise different issues fearing that it will expose the face of the government.