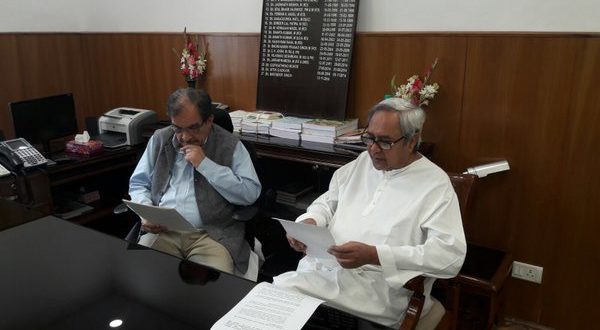 Holding a discussion with Rural Development Minister Chaudhary Birender Singh in New Delhi, the chief minister said the proposal of the state government for construction of 24 road projects are critical for the Left Wing Extremism (LWE) affected districts of Malkangiri and Koraput.

He said the road projects under Road Requirement Plan Phase-II covering a length of 375 km at a cost of Rs.657 crore might be sanctioned at the earliest.

Highlighting that inadequate allocation of central assistance are adversely affecting implementation of vital programmes relating to rural drinking water, rural livelihoods, rural employment guarantee scheme and Indira Awaas Yojana, he impressed upon the Minister to restore the allocation under these programmes and to release the balance funds to the state urgently.

The chief minister said that the state is yet to receive the approved central assistance of Rs.503.74 crore under Indira Awaas Yojana and sought to release the fund at the earliest.

He said that the central share of Rs.2116.80 crore towards labour budget under Mahatma Gandhi National Rural Employment Guarantee Scheme (MGNREGS) had not been fully released till date.

Informing that the ministry has released only Rs.1479.41 crore and that the state has been managing this important programme from out of its resources since January 2016, he urged to release the balance amount of Rs.637.39 crore at the earliest.

He said that though the union cabinet had approved the inclusion of 4035 left out unconnected habitations in the Core Network under Pradhan Mantri Gram Sadak Yojana (PMGSY) in February 2013, the proposal is still pending approval in the ministry.

The chief minister mentioned that the proposal of the state government for upgradation of 3000 km of roads badly damaged by the Cyclone Phailin should be placed before the Empowered Committee of the Ministry for sanction at the earliest.

He asserted that the reduced allocation of Rs.78 crore under the National Rural Drinking Water Programme (NRDWP) during the current year 2015-16 has adversely impacted the implementation of the programme.

The chief minister urged upon the minister to restore the allocation under NRDWP to at least Rs.250 crore, as provided for in the previous years.

The Rural Development Minister assured that his ministry would endeavour to resolve all the issues.
The minister assured that 4035 left out unconnected habitations in the Core Network will be sanctioned at the earliest under PMGSY after receiving the figures of population of each habitation based on 2001 Census from the state.

He added that 3000 km of roads badly affected by Cyclone Phailin will also be approved by the Empowered Committee within a week.

On the issue of restoration of allocation under National Rural Drinking Water Programme (NRDWP), the minister stated that about Rs.91 crore has already been released to the State during the current year and another Rs.4 to 5 crores is expected to be released shortly.

Further, Odisha will be provided additional funds from the savings available during March 2016. Additional funds will also be be provided in due course under the World Bank Assisted Project for Bulk Water Supply after the Department of Economic Affairs (DEA) approves the proposal, he mentioned.

Singh also assured that additional central assistance of Rs.295 crore is being released to the state under Indira Awaas Yojana. Further, he stated that the State would be provided additional resources under National Rural Livelihoods Project and Mahatma Gandhi National Rural Employment Guarantee Scheme.