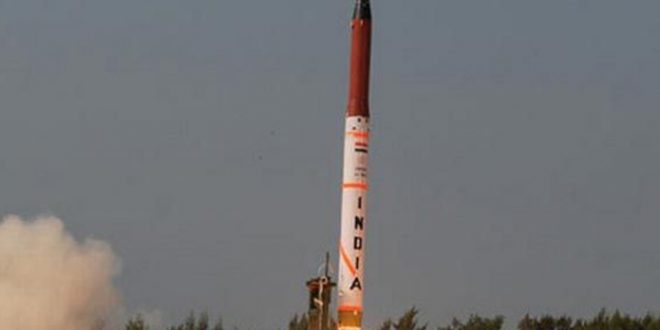 BALASORE: India on Monday successfully test-fired its indigenously built nuclear-capable Agni-I missile, capable of hitting a target at a distance of 700 km, from a test range off the Odisha coast.

It was test fired at 9: 11 am as part of Strategic Forces Command (SFC) training exercise from a launch pad of the Integrated Test Range (ITR) at Abdul Kalam Island (Wheeler Island).

“The exercise was conducted in a perfect manner, and the trial was successful,” said a defence official.
The surface-to-surface, single-stage missile, powered by solid propellants, is a medium-range ballistic missile developed by DRDO.

Agni-I was first tested at the Interim Test Range in Chandipur in 1989. The 15-metre tall Agni-1 missile, weighing about 12 tonnes. It is capable of carrying a conventional payload of 1,000 kg or a nuclear warhead. It was successfully test fired in November last year.