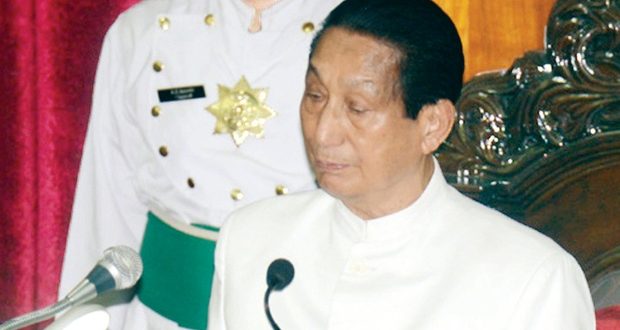 BHUBANESWAR: The budget session of Odisha Assembly on Tuesday began with the speech of Governor S.C. Jamir, who said the state government had set a target to achieve a growth rate of 9% during the 12th Plan Period.

“Our aim is to achieve a growth rate of 9% during the 12th Plan Period, which my government wants to set as the ‘new normal’ and to achieve this, my government is progressively increasing resources allocations to various state plan activities,” said Jamir addressing in the house of the state assembly.

“My government is following this new behavioural trend in constantly improvising in aligning governance measures so as to ensure a better-governed society,” he pointed out.

He said though economic slowdown had its shadow on the government’s abilities to augment resources mobilisation, it could achieve the budgeted target through better revenue mobilisation measures.

“Our commitment to inclusive growth backed by your own increasing resource allocations for the same have made us the fastest growing economy in our country, nearly doubling the per capita income with the highest reduction of poverty in a decade,” said the governor.

He said state’s own tax revenues increased by 17.43% and non-revenue receipts registered a growth of 10.40%, making the tax/GSDP ratio climb 6.38%.

Informing that irrigation sector tops the list of priorities, he said the water resources department had been mandated to create additional 10 lakh hectares of irrigation by 2019.

Stating that the law and order situation of the state is peaceful, he said the incidents of left-wing extremism violence and death of security personnel and civilians this year have been less in number.