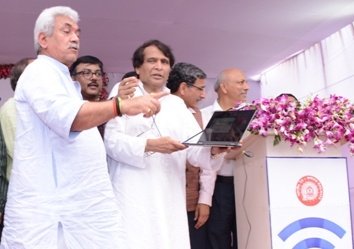 Prabhu said the high-speed Internet service would benefit the passengers as they can surf the net while waiting for their trains.

He said Railways is committed to providing better internet facilities to the passengers at 100 busiest stations in the country by the end of this year.

Work for free WI-FI service at Cuttack and Puri would begin soon, and it would be operational in Puri station before Ratha Yatra, said Prabhu.

Under the Digital India launched by prime minister Narendra Modi, internet service will be started at 400 stations across the country.

Google’s free WiFi service will be available to any user who has a smartphone in the area, said a senior official of Railways.

Besides Bhubaneswar, trials are going on at about ten more stations including Jaipur, Patna, Ranchi, Ernakulam, Allahabad, Lucknow and Guwahati for the launch of Wi-Fi services shortly.

Notably, Railtel, a PSU of the Railways, is providing free Wi-Fi service at stations in collaboration with Google.

Meanwhile, Congress workers staged a demonstration in front of the ticket counter at Bhubaneswar railway station protesting railway minister Suresh Prabhu’s visit. They were protesting Prabhu for shifting the rail waggon factory from Narla in Kalahandi to Andhra Pradesh.