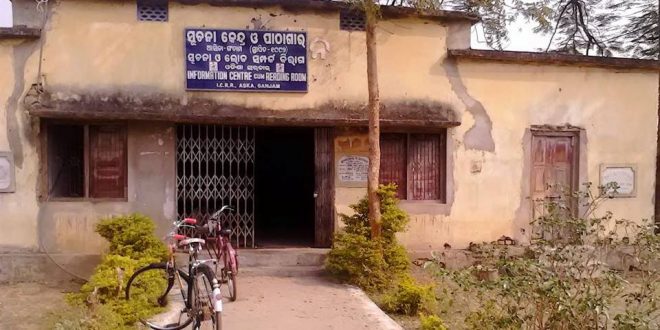 ASKA: More than two decades old information centre-cum-reading room at Aska in Odisha’s Ganjam district is losing its credentials as the building in which it is functioning has turned to be dilapidated.

As there is no alternative library in Aska town, one of the oldest Urban Local Body (ULB) of Odisha, intellectual mass including students and teacher have no other option but to move to the ICRR library at the heart of Aska town. But they are compelled to read in an insecure building with damaged doors and shutters and vulnerable roof from which scraps of cement concrete keeps on falling.

The Information and public Relation department had opened an information centre-cum-reading room (ICCR) in the famous sugar town in the year 1992, among other 10 ICRR opened elsewhere in the state. Aska authorities provided Basant Bhavan building in the premises of coronation park for functioning of ICRR as part of their noble gesture. But due to serious negligence displayed in the repair and maintenance of the building, the building reduced down to the status of an abandoned building.

Several communiqué for the renovation of the dilapidated building had remained unheard so far. Concerns being expressed by a large intellectual cross section of the Aska town over the condition of the building and the ICRR as well.

Even though demand for repair and renovation of the building is coming from different quarters, the local NAC is callous and indifferent to the state of affairs.

It is noteworthy that the newly joined District Information and Public Relation Officer G.B. Singh has expressed serious concerns over the condition of ICRR building.