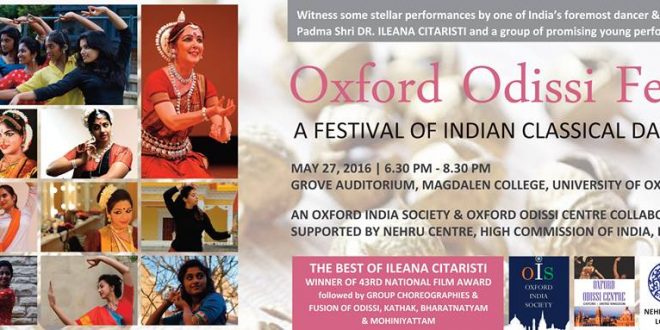 Oxford Odissi Fest On May 27

BHUBANESWAR: An Odissi dance festival will be held at Oxford University on May 27, informed Baisali Mohanty in a statement.

Mohanty, who is the founder of Oxford Odissi Centre and a post-graduate student at Oxford, is organising the event named ‘Oxford Odissi Fest’.

The statement claimed that it would be the first ever Indian Classical Dance Festival at the 900-year-old Oxford.

The festival is to be held at the Magdalen Grove auditorium of Oxford University and Odissi exponent Padma Shri Ileana Citaristi, Turkish dancer Guzin Yener, Nisha Somasundaram besides Basali and other dance exponents from more than 11 countries are to give performances at the event.

Beside solo Odissi performances, duet and group choreographies and jugalbandi of Kathak, Bharatnatyam and Mohiniyattam will also be presented, the statement adds. A photographic exhibition on the history of Odissi dance will also be held in the foyer of Magdalen Grove auditorium.

The Oxford Odissi Centre was founded in December 2015 by Baisali Mohanty, who is an AlC Global Fellow at Oxford University.