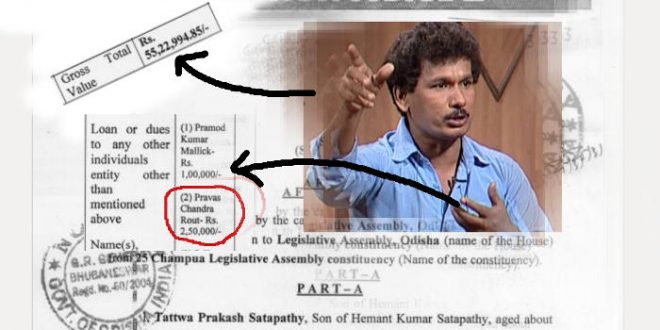 BHUBANESWAR: At a time the Crime Branch is investigating into Ollywood and Oscar chit fund company links, it came to fore that comedian Papu Pom Pom alias Tatwa Prakash Satapathy has received Rs 2.5 lakh as loan from Pravas Chandra Rout.

ing to the affidavits filed by Papu during submission of nomination paper to contest for Champua Assembly constituency on BJD ticket,  Papu has mentioned that he received Rs 2.5 lakh as loan from Pravas Chandra Rout.   (A copy of the affidavit is with Update Odisha).

However, it is yet to be confirmed that whether it was Oscar chit fund chairman Pravas Rout or any other person named Rout.

He has mentioned in the affidavit that he has Rs 55.22 lakh as movable assets. His wife Sangeeta Satapathy has Rs 4.25 lakh immovable assets.

According to the affidavit of Papu submitted before the Election Commission, he had received the donation of Rs 1.44 lakh from some Rout.

“He is not that Prabhas Rout, who has been arrested in Oscar chit fund scam. But, I am also not sure who is that Rout, who has donated me during elections. I will clarify the issue later,” he had told Update Odisha.