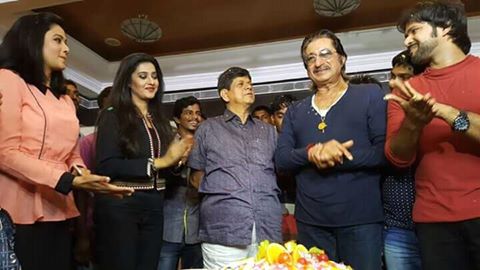 Bhubaneswar: Odia actress Barsha Priyadarshini and Archita Sahu are all set to share the screen for the first time in Odia movie ‘Chhati Tale Ding Dong’.

The film produced under the banner of Manjari Movies will have Bollywood actor Shakti Kapoor and Ollywood Chocolate hero Sabyasachi Mishra.

This will be the seventh movie of Manjari Films. It is directed by Mrutyunjay Sahu and produced by Soumyaranjan Pattnaik.

We have tried to give a new dimension to the Odia film industry by taking two lead heroines Archita and Barsha in the movie. We hope it would entertain the audience. – Mrutyunjay Sahu.

This will be the second Odia movie of Shakti Kapoor after ‘Bahudibe Mo Jaga Balia’. Known for his villainous and comic roles in Hindi films, Shakti Kapoor will be seen shaking his legs in an item song.

The shooting of the movie ‘Chhati Tale Ding Dong’ has already started.

There is a problem while speaking Odia. But, I am trying to give my best in the film. – Shakti Kapoor.

He also revealed some parts of the story. The story focuses on a Gym trainer, who deceives people by assuring to make them slim.