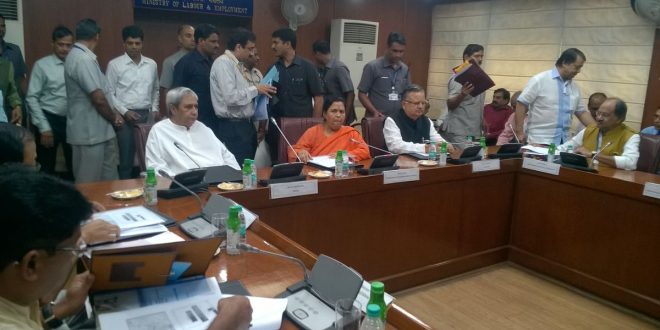 New Delhi: The tripartite meeting convened to resolve the Mahanadi water dispute between Chhattisgarh and Odisha failed to get any breakthrough, even though it was decided to form a committee to examine the whole situation.

The Mahanadi water issue remained inconclusive as both the states were adamant on their stand.

Union Water Resources Minister Uma Bharti said a committee would be constituted to examine the projects.

I proposed both the government to stop construction for at least a week. Since we need time to resolve the issue as we have to go to the route of the dispute – Uma Bharti.

She said another committee will be formed, as proposed by Odisha government, to study the situation in Mahanadi basin during monsoon and non-monsoon period.

Odisha Chief Minister Naveen Patnaik said the demand to stop construction work immediately on the upper catchment of Mahanadi river was not agreed in the meeting.

He said that while 65% of people in Odisha depend on the Mahanadi river, the construction of projects will have an impact on delicate environment equation in the state.

The government would take its next course of action in the cabinet meeting on Sunday, said Patnaik.

Mahanadi is the lifeline of Odisha. 65% of our population is dependent on Mahanadi and it touches the lives and livelihood of people in 16 districts. Mahanadi provides a huge Ecological balance to our otherwise disaster-prone state. Mahanadi Delta houses the Unique Biodiversity hotspots of Chilka Lake. Bhitarkanika, Satkosia, and Gahirmata – Chief Minister Naveen Patnaik.

He said the water being released from Chhattisgarh could fill Hirakud reservoir five-time.