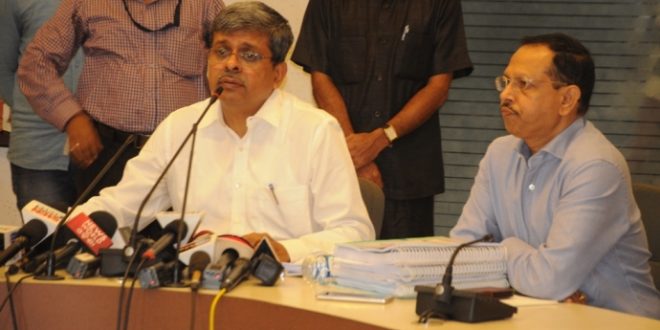 Bhubaneswar: The Odisha cabinet on Sunday empowered the state government to explore all possible options to protect the interests of the state on Mahanadi water dispute with Chhattisgarh.

After deliberations, the state cabinet unequivocally endorsed the stand taken by the state government and resolved to explore all possible options for protecting the interests of the people of Odisha – A.P. Padhi, Chief Secretary.

However, the cabinet could not take any decision on steps to be taken to protect the interest of Odisha.

The state government would take a decision in this regard soon – Padhi.

According to sources, the state government is in consultation with law department before embarking on a legal battle.

The state government is also not in favor of the committee proposed by the centre to examine the projects constructed in the upper catchment area of Mahanadi river.

In the tripartite meeting held in New Delhi on Saturday, Union Water Resources Minister Uma Bharti had proposed to set up a committee within seven days to examine the projects and its possible impact.

We had proposed to constitute a fact-finding team with representatives from both the states and other experts to inspect and review the possible impact of the projects. The team would have taken three months time to prepare the report – Padhi.

He said the Chhattisgarh government did not agree to stop construction work during the intervening period.

With the state government delaying to take steps on the matter, the opposition smells that the BJD government wants to stretch the issue to Panchayat elections for its political gain.

The Chief Minister had on Saturday said that the cabinet would take the next course of action. But, the matter remained there where it was earlier, said a Congress leader.