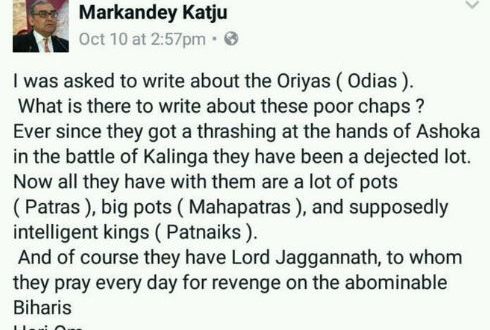 In his Facebook post, Katju said, “I was asked to write about the Oriyas (Odias). What is there to write about these poor chaps? Ever since they got a thrashing at the hands of Ashoka in the battle of Kalinga, they have been a dejected lot. Now all they have with them are a lot of pots (Patras), big pots (Mahapatras) and supposedly intelligent kings (Patnaiks). And of course, they have Lord Jagannath to whom they pray every day for revenge on the abominable Biharis. Hari Om”.

The comments made by Katju have been strongly criticized by different sections of people. The Twitterati reacted on their way.

PS: All this is a joke. Plllleease do not file charges against me.
-TS pic.twitter.com/BaELQVP5KG

Katju is a Mental Case.Just IGNORE HIM give comments that creates, Pain, agony, Hurting to Others and Indiscipline He needs Mental Hospital https://t.co/2n3VIhmETX

Justice Markandey Katju survives on the oxygen of cheap theatrics after retirement. Stop paying attention to the senile man.

The comment of Markandeya Katju about Odias is deplorable. It reveals his ignorance and proves that he is an idiot.

Foolish, juvenile comments deserve contempt, not a response. Clearly, neither years nor a career in law can be relied upon to impart wisdom! https://t.co/eL2Sp75nM6 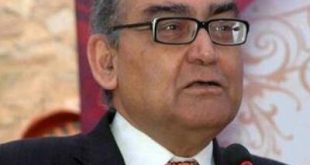 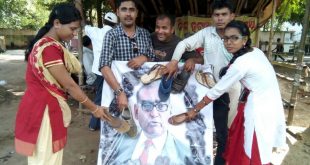 Katju Apologises For His Anti-Odia Remarks