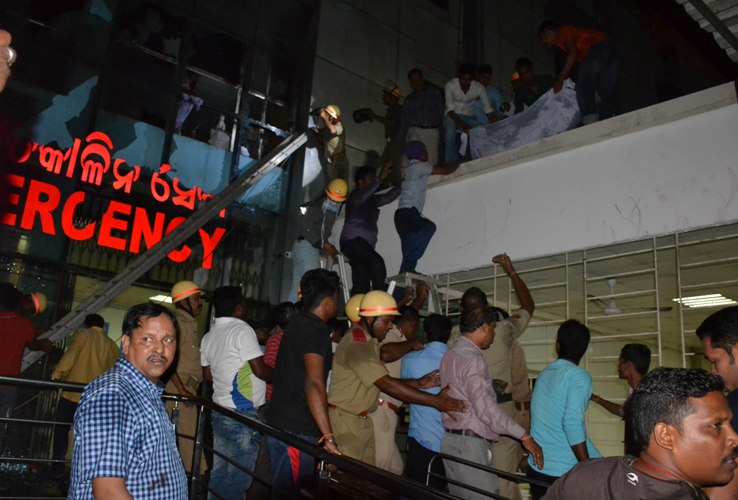 Bhubaneswar: The fire tragedy at Institute of Medical Sciences and SUM Hospitals has exposed some facts that how the hospitals in Odisha are functioning without possessing ‘fire safety certificate’.

According to a note of the Directorate of Medical Education and Training (DMET), only three corporate hospitals in Bhubaneswar, Cuttack, and Puri, where more than 568 private hospitals and nursing homes are operating, have fire safety certificates.

The list did not include the name of SUM hospital.

“It is pertinent to mention that Fire Safety Certificate (FSC) has been issued by this Directorate General to only three (3) have got FSC. The three private hospitals are Apollo Hospital, Sainik School Road, Bhubaneswar, Advanced Medical Research Institute (AMRI) Hospital Ltd., Khandagiri, Bhubaneswar and Kalinga Hospital, Chandrasekharpur, Bhubaneswar. Conditional FSC for six months has been issued to Panda Curie Cancer Hospital, Telengapentha, NH-5, Cuttack on 13.07.2015 to comply the conditions,” the letter said.

Odisha has over 1200 private healthcare institutes. The fire service directorate issues the certificate to those establishments, including high rises that adhere to its fire safety recommendations.

Notably, the Centre and the state governments had issued fire safety guidelines to be followed at different clinical establishments after the AMRI hospital incident in Kolkata in 2011. However, there was little follow-up action to ensure implementation of the guidelines.

The FIR lodged by the fire department also revealed that SUM hospital has blatantly violated the fire safety norms.

“A fire audit of the SUM Hospital was conducted in 2013 and several shortcomings were noticed and intimated to the hospital authority for necessary compliance for the safety of life and property before the issue of a fire safety certificate. This was also intimated to Planning Member BDA with a copy to the authorized signatory of SOA, the owner of SUM Hospital,” read the FIR.

The hospital neither had a 25 thousand liters water tank nor a functional sprinkler system that could have been used to mitigate the disaster.

“Fire detection system was not functioning as it had not been integrated properly because of which there were no alarms warning the people of the situation,” said the FIR.

External fire escape staircase has not been provided which hindered evacuation and the people/patients had to be evacuated through windows after breaking the glass panels.

“The existing fire protection system available in the building like fire hydrant system did not function during fire fighting and there was no water source available in the hospital premises. Consequently, the fire service water tankers had to be repeatedly sent to the Fire Training Academy for providing adequate water for firefighting during the entire operations,” states the FIR.

“The fire tragedy of such a magnitude occurred entirely due to negligence on the part of the hospital authorities for failing to install the recommended fire safety measures and inadequate maintenance of the available fire safety installations.”