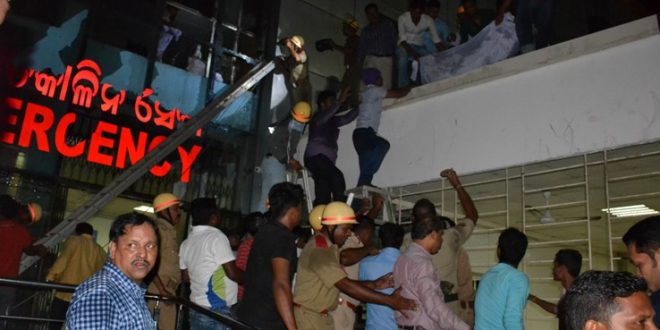 How SUM Hospital Got Clearance Without Fire Safety Certificate?

Bhubaneswar: The Institute of Medical Sciences and SUM Hospital, where 21 people died due fire mishap, has got the clearance to operate without getting fire safety certificate, which raises a finger at the hospital-politician-bureaucrat nexus.

The Khurdha district collector has renewed the registration certificate to operate the hospital on July 7, 2016.

The certificate of fresh registration shall be valid from April 6, 2016, to April 5, 2018, said the collector’s letter.

Notably, the FIR lodged by the fire department also revealed that SUM hospital has blatantly violated the fire safety norms.

It said that the hospital has not obtained the fire safety certificate and did not follow the advisory.

“The fire tragedy of such a magnitude occurred entirely due to negligence on the part of the hospital authorities for failing to install the recommended fire safety measures and inadequate maintenance of the available fire safety installations,” said the FIR.