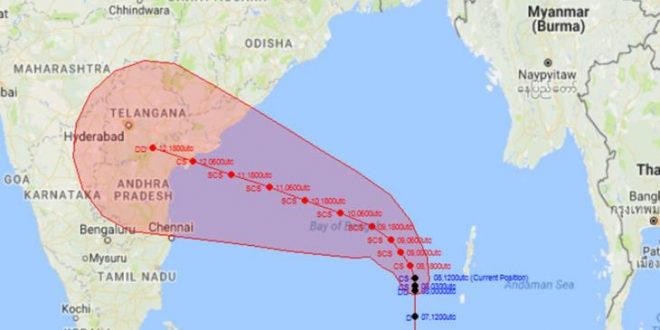 Vardah is third cyclone over Bay of Bengal this year

Bhubaneswar: The cyclonic storm Vardah, which has formed over the Bay of Bengal, is the third storm in the ocean in one year during the northeast monsoon season.

According to weather experts, Vardah will intensify into a severe cyclonic storm and move towards the Andhra Pradesh coast.

The first cyclone storm that had formed this year was Cyclone Kyant. It had formed in the end of October and brought good rainfall at several parts of the country. Then Cyclone Nada formed over the ocean which gave good rains over Chennai and other areas of Tamil Nadu.

Now, cyclone Vardah has formed over the Bay of Bengal.

“This is the first time in the last three years that three cyclones will develop in the Bay of Bengal in one year during northeast monsoon season,” said experts.

The cyclone Vardah is very likely to intensify further into a severe cyclonic storm during next 12 hours.

“It is very likely to move initially northwestwards, then west-northwestwards and cross Andhra Pradesh coast between Nellore and Kakinada around afternoon/evening of December 12. However, there is possibility of slight weakening of the system before landfall,” said an IMD release.