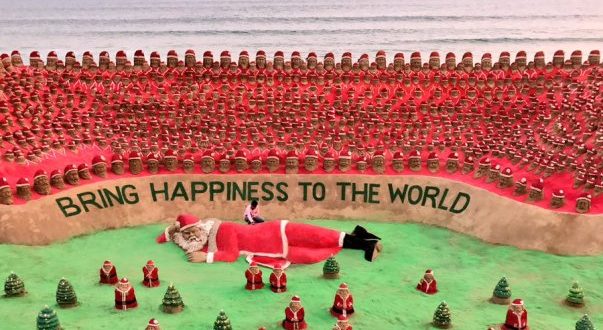 Summary: Internationally acclaimed sand artist Sudarsan Pattnaik on Saturday created 1000 sand Santa Clauses at Puri beach. This will be another record to his name in the Limca Book of Records. He took four days and 1000 tons of sand to carve these sculptures. 35 of his students accompanied him to achieve this success.

Sudarsan aims to create yet another world record by achieving the feat. He created the sand Santa with the message “Bring Happiness to the World”.

This year, Sudarsan tried to break his own record which he had created in 2012. In 2012, he had created five hundred sand Santa Clauses which was placed in Limca Book of Records.

Pattnaik took four days and used about 1, 000 tons of sand with some colored sand to carve this one thousand sand Santa Clauses. About 35 students of his sand art school joined hand with him to finish this.

The festival will continue till January 1, the New Year.

“I always try to give some awareness messages through my sculpture to the world. So, I chose the awareness about global happiness through Santas as the subject at the year-end,” said Sudarsan.

So far, Padma Shri awardee sand artist Sudarsan Pattnaik has participated in more than 50 international sand art championships and festivals around the world and won many prizes for the country. 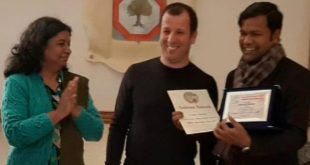