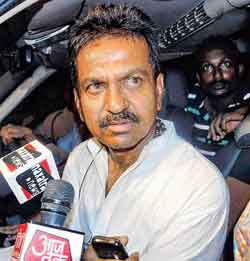 A complaint has been lodged against Nayak at Jharipani police station in Sundergarh district for distributing money among the voters at Jharipani panchayat under Bisra block om Tuesday night.

Local people heckled the former minister and his aides while they were caught for distributing cash among the voters.

According to sources, a business tycoon and residents of Jhirpani were also involved in the money distribution.

“This is the modus operandi of the ruling party. This incident clearly shows the favouritism being meted out to the ruling party members. The police officials and the district authorities are hand in glove with the power corridor for which the accused went scot-free. Actually, Sarada Nayak should be arrested and detained by the police till all the phases of the polls complete,” said BJP spokesperson Sajjan Sharma.