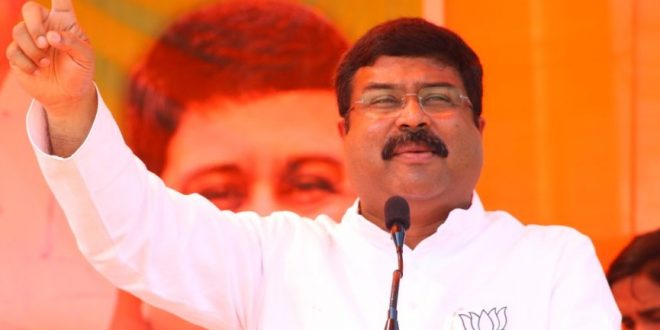 He also thanked the people of Odisha for supporting the saffron party in the ongoing panchayat polls.

The Union Minister expressed his gratitude towards the people of the state for blessing the BJP candidates in the last three phases of the ongoing five-phased Panchayat poll.

“I express my gratitude to the voters of the state for blessing the BJP candidates. In fact they have dismissed the inefficient and corrupt ruler,” said Pradhan.

He further reposed his faith on the people and said the people will continue to vote for the BJP candidates in the next two phases.

Meanwhile, BJD claimed that the Union Minister is not leaving any stones unturned to attack the BJD. The result will not have any impact on the general election to be held in 2019.

“Pradhan is crossing all the limits to attack the BJD. He should not forget that BJD was on the top and will continue to be on the top as people have faith in Chief Minister Naveen Patnaik. The results of the Panchyat election will not have any impact on the general election to be held in 2019,” said BJD spokesperson Sashi Bhusan Behera while countering the statement of Pradhan.

In the first phase of the rural election, BJD had won 119 Zilla Parishad seats while it came down to 101 in the second phase.

On the other hand, the saffron party became victorious in 60 Zilla Parishad seats in the first phase and managed to get 59 seats in the second phase.