He urged them to work dedicatedly for the welfare of the people of their own area.

“I congratulate the elected members of Panchayat Samiti and Zilla Parishad of Odisha. They are the fulcrum of democracy, serving people and bringing change and development at the grassroots,” Patnaik posted on his Facebook page.

“I urge them all to work dedicatedly for the welfare of people and live up to people’s expectations and honour the faith reposed in them,” he added.

The results of ZP zones were declared on Sunday. While BJD retained the top position by grabbing 472 Zilla Parishad zones, BJP rose to the second spot with 298 seats. Congress slipped to the third position with only 60 seats.

Similarly, Independent candidates and other candidates have managed to pocket 16 zones.

Out of 849 ZP zones, results of 846 were declared while results of three other zones, one each from Cuttack, Bolangir and Ganjam district, have been put on hold for various reasons. 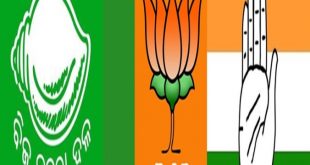