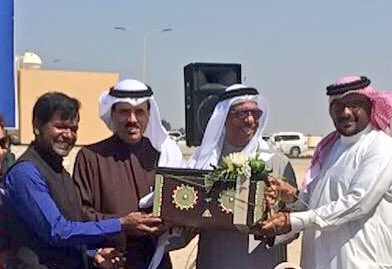 Bhubaneswar: Indian sand artist Sudarsan Pattnaik was awarded by the Kingdom of Bahrain for his contribution to the Spring of Culture’s Community Program and sharing his wondrous talents with the teachers of the Kingdom.

Sudarsan Pattnaik received the award from Minister of Education, Kingdom of Bahrain, Majid bin Al-Nuaimi in Bahrain on Thursday.

The sand artist had been invited for the second time by the Kingdom’s Economic Development Board (EDB) and the Ministry of Education to lead a sand art workshop and training program for the island’s teachers.

Over a 5-day period, the maestro was joined by several educators to learn the magic of sand art wherein he helped the participants create their own sand sculptures.

I have been called for multiple programs across the globe. But when the Kingdom of Bahrain invited me to educate its teachers who in turn can share their knowledge with million others, I was deeply touched by the concept and accepted the invitation at once.

The award-winning sculptor was also felicitated by the Bahrain Odia community at Arun Kumar Praharaj’s residence in a grand ceremony for taking Odisha to the world.

Pattnaik has been awarded Padma Shree in 2014.