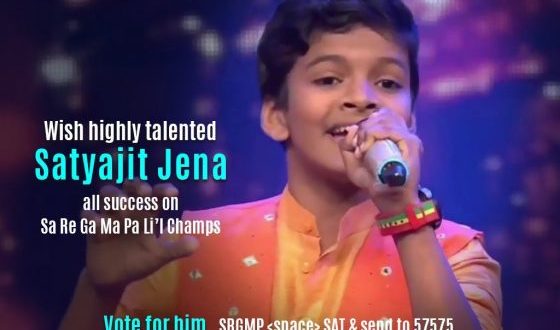 Bhubaneswar: Odisha Chief Minister Naveen Patnaik has appealed people to vote for the Odia singing sensation Satyajeet Jena, who is in the top 10 list in the singing reality show Sa Re Ga Ma Pa Li’l Champs on Zee TV.

“I am delighted to see Satyajeet Jena from Anandapur make his place in the finals of Sa Re Ga Ma Pa Li’L Champs show. I happened to see him on the show and have been very touched by his voice ever since. He has captured the imagination of the nation. I voted for the budding sensation and wish him the top honours in the show along with more successes in life,” Patnaik said.

During his performance on last Saturday, Satyajeet performed on the melodius ‘Mohabbat Barsa De Tu Sawan Aya Hai’ originally sung by Arijit Singh, written and composed by Tony Kakkar – who is brother of one of the judges Neha Kakkar.

The 12-year-old impressed the judges – Himesh Reshammiya, Javed Ali and Neha Kakkar. Besides, he secured 94.3% from the grand jury.

His first performance of Neha and Tony Kakkar’s hit song Mile Ho Tum Hum ko Bade Nasibon se..” from Fever had the listeners including the judges bowled out.

To vote for Satyajeet Jena, one can send text message by following this instruction: SRGMP<space>SAT and send it to 57575.