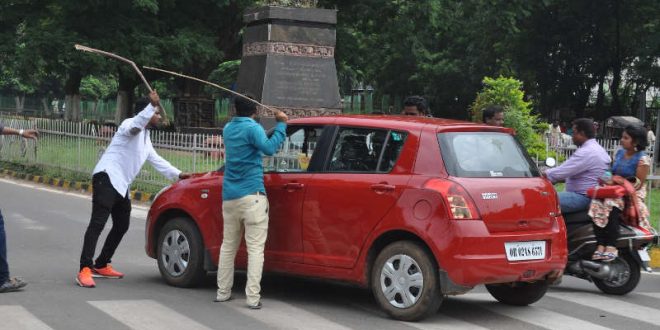 Bhubaneswar: Normal life was disrupted across Odisha and sporadic violence reported as the ruling Biju Janata Dal (BJD) on Monday observed a five-hour strike protesting against the hike of petrol and diesel prices.

Shops, business establishments and several educational institutions remained shut in Bhubaneshwar and elsewhere in the state during the ‘hartal’ from 7 am to 12 pm.

School children and office-goers bore the brunt as protesters blocked roads in Bhubaneswar and other parts of the state.

The state government issued an advisory to close all schools and colleges in view of the strike. The schools conducting examinations have been asked to conduct the same on some other day.
Hartal supporters picketed and put up road blockade at major junctions in the state capital by burning tyres.

Several activists carrying sticks were seen preventing people from moving on roads. Several vehicles were attacked with sticks and stones at some places and damaged, while the picketers allegedly heckled commuters in some localities here.

As the unruly situation prevailed in presence of police, BJD’s MP Baijayant Panda criticised its own party for the incident.

Panda took to Twitter to condemn the violence and vandalism by the party workers.

“This isn’t the party I assisted NP (Naveen Patnaik) to found 20 yrs ago. I’m ashamed & angered by this. Biju babu (Biju Patnaik) wd’ve been too. Armchair strategists must go,” Panda said.

He also condemned an incident where BJD activists did not allow an ambulance to proceed during the strike.

“Shameful. I dissociate from & condemn this (I can’t on party’s behalf since I’m no longer the spokesperson). These goons must face action,” he tweeted.