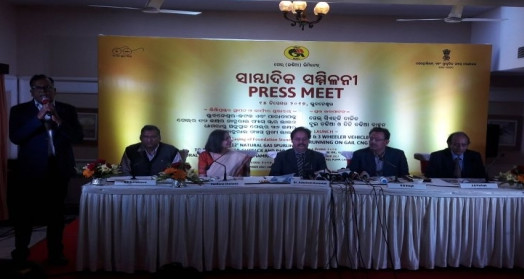 Bhubaneswar: Marking another significant milestone in the spread of the Pradhan Mantri Urja Ganga in Odisha, Union Petroleum and Natural Gas Minister Dharmendra Pradhan will launch supply of Compressed Natural Gas (CNG) and CNG-run scooters in Bhubaneswar on Saturday.

In addition, GAIL (India) Limited will sign term-sheets with industrial customers for supply of Natural Gas and a Memorandum of Understanding (MoU) for skill development of local youth in presence of the Minister.

GAIL Director (Projects) Ashutosh Karnatak on Friday said two CNG stations will be inaugurated at Chandrasekharpur and Patia in Bhubaneswar on Saturday.

“The Minister will inaugurate CNG stations in Chandrasekharpur and Patia on Saturday. Two more stations are being constructed in Khandagiri and Tamando. Over the coming years, 25 CNG stations will be commissioned in the twin cities of Bhubaneswar and Cuttack to supply CNG to the vehicles.”

He informed that GAIL is implementing the Pradhan Mantri Urja Ganga and also the City Gas Distribution (CGD) projects in Bhubaneswar and Cuttack.

“Initially, natural gas will reach Bhubaneswar in special containers called ‘cascades’ transported by road from Vijaywada in Andhra Pradesh. Later, it will be supplied through the 2655 km long Jagdishpur-Haldia and Bokaro-Dhamra Natural Gas Pipeline (JHBDPL), popularly known as the Pradhan Mantri Urja Ganga,” he further informed.

It was further announced at the press conference that the Union Petroleum and Natural Gas Minister will also lay the foundation stones for new Dhamra-Angul 36 inch main line and Bhubaneswar-Cuttack-Paradip 12-inch spur line on Sunday which is part of this pipeline project.