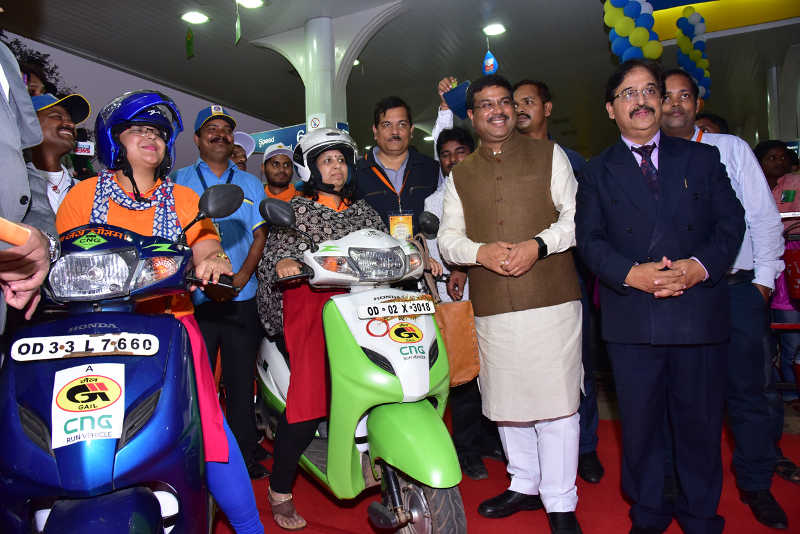 The Minister also inaugurated CNG stations at Chandrasekharpur and Patia.

Two more stations are being constructed in Khandagiri and Tamando. Over the coming years, 25 CNG stations will be commissioned in the twin cities of Bhubaneswar and Cuttack to supply CNG to vehicles.

Pradhan said, “By use of CNG instead of petrol and diesel in two-wheelers, one can save up to 30 to 40 percent of his oil expenses per month”.

While many cities of India are suffering due to pollution, CNG will be a smart fuel for the smart city like Bhubaneswar, the capital of Odisha, the minister added.

Pradhan said that Rs 5000 crore will be invested for the pipeline project.

From these Rs 5000 crore, Rs 2000 crore is estimated to be invested for development of human resources.

In first phase Rs. 1700 crore will be invested for Compressed Gas Distribution (CGD)-100 km Pipeline each in Cuttack-Bhubaneswar.

With the construction and maintenances of these pipelines, it will create huge employment for the local youths and it will help in boosting Odisha’s economy, said the Petroleum Minister.

The Minister will also lay the foundation stones for new Dhamra – Angul 36 inch main line and Bhubaneshwar – Cuttack – Paradip 12 inch spur line on December 17, which are part of this pipeline project.