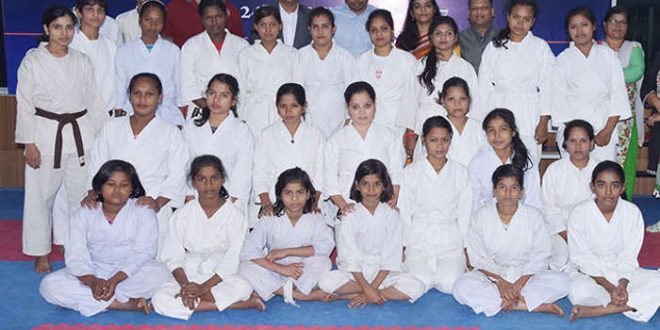 On successful completion of the 10 days programme, the girls hailing from various slum localities in the smart city district were awarded certificates and felicitated by Mayor Ananta Narayan Jena at a special function organized in the premises of Utkal Karate School, where the training sessions were conducted over last 10 days.

Of the twenty-five girls who completed the training today nine each are from Press Colony Jagannath Basti and Shantui Palli Basti while five are from Telugu Basti in Saheed Nagar and two from Masjid Colony.

The second batch of 32 girls, also from various slums of BTCD, attended the function as part of their orientation programme for the self-defence training. These girls will start the training in self-defence from tomorrow for 10 days which will be followed by eighth other similar batches totalling around 320 girls from 24 slums in BTCD area.

The training is being held at Utkal Karate School, founded by famed Martial Art trainer Hari Prasad Pattnaik. After the completion of the training, all the participants will be given certificates along with a nominal stipend from BSCL under Socially Smart Bhubaneswar initiative.

Humara Bachpan Trust (HBT) is the implementing partner for the project for community mobilization and selection of the girls for training after holding series of discussions with community members and important stakeholders of the respective slums.

All the participants in today’s programme had a great time interacting with Mayor Ananta Narayan Jena and sharing their experience of the 10 days self-defence training programme.

Expressing happiness on the welcome step under Socially Smart Bhubaneswar initiative, Mayor Ananta Narayan Jena congratulated the girls on successful completion of the 10 days self-defence training programme, advised them to be brave and bring forward the issues faced by them before the authorities for quick redressal.

Adding that education and cleanliness are two important factors for the all-round development of residents, he urged the participants to help spread awareness on maintaining cleanliness in the neighbourhood of slums in the city.

Appreciating the work being done in the slums by Pragati Sathi peer leaders, Mayor Jena announced to include an award for best-performing peer leaders in the famed Nagara Bandhu Samman presented by the city on Local Self Governance Day every year.

Appreciating the initiative, General Manager (Operation), BSCL, Bijaya Kumar Swain said “this step is in perfect sync with the ‘Padhiba, Gadhiba, Shrestha Heba’ slogan given by the Hon’ble Chief Minister on last Children’s day. He advised the girls to make good use of the training in a positive way to bring change in the society and help more and more women get the confidence to successfully overcome various challenges faced in daily life.”

UNFPA State Coordinator Dr Deepa Prasad mentioned on the partnership between BSCL, BMC and UNFPA for Socially Smart Bhubaneswar initiative and encouraged the girls to become change-makers in their respective slums.

Lawyer Haripriya Samantray from State Legal Aid cell informed the participants on various legal provisions and facilities available for them through legal aid clinics, protection officers and free legal services in case of any violence against girls and women.

Several of the participants narrated their experience at the function and also presented a demo practice on the occasion. Elated after successful completion of the self-defence training programme, Swayamsikha Swain (10 yrs) from Press Colony Jagannath Basti said she now has more confidence in facing anyone who tries to harass or misbehave with her. Echoing similar feeling 12-year-old Sonali Sahu expressed her desire to spread the learnings among fellow residents in her slum.