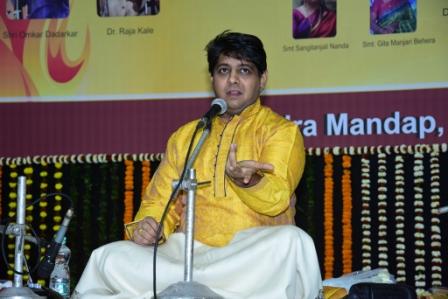 Sufi Music is arguably one of the best known mystical forms of devotional music. Having its origin in modern day Iran and Afghanistan, Sufism spans almost half the world from the plains of Africa to the eastern coast of India and onward to Indonesia.

The first programme of the inaugural evening was Abhangs by Omkar Dadarkar, a brilliant young vocalist in the field of Hindustani Classical Music is presently attached to I.T.C. Sangeet Research Academy, Kolkata as a Junior Guru.

He presented Abhangs, a form of devotional poetry sung in the praise of Lord Vitthala or Vithoba with a shrine at Pandharpur in Maharashtra. Abhangs are exuberant expressions of community experience as opposed to Bhajans, which focus more on the inward journey.

He was accompanied on Tabla by Ashok Mukherjee, on Harmonium by Anirban Chakraborty and on Flute by Paramanand Roy.

Shagun traditions believe in the Material form of God, whereas Nirgun tradition believes that the Almighty is formless. He was accompanied by Harmonium – Shyam Sundar Joshi, Pakhawaj –Satchidananda Das, Tabla -Sarat Pani and Manjira – Arup Das.