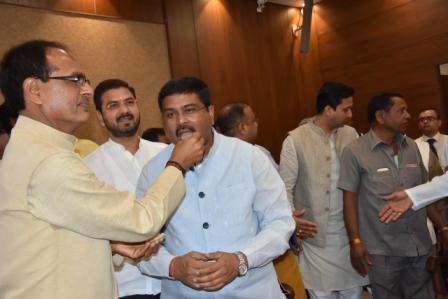 Pradhan filed his nomination papers before the Returning Officer at the Madhya Pradesh Assembly in presence of Chief Minister Shivraj Singh Chouhan and his party MLAs and ministers.

The tenure of Pradhan, who was elected as a Rajya Sabya member from Bihar in 2012, will end on April 2.

Pradhan has become the first leader from Odisha to represent the Upper House from two neighbouring states.

“I am grateful to my party for giving me the opportunity to be its Rajya Sabha candidate from Madhya Pradesh. I will work with the guidance of Madhya Pradesh Chief Minister Shivraj Singh Chouhan and work with the best of my capabilities,” said Pradhan.

“I will keep working hard for the welfare of people of MP, Odisha & the whole country,” he added.