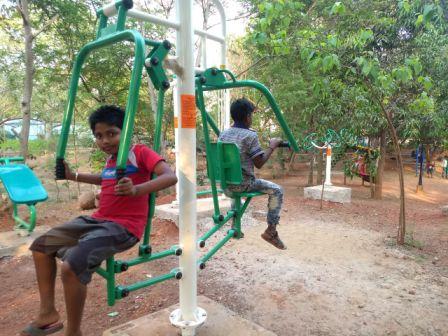 Bhubaneswar: Continuing its strategy to provide better health and lifestyle practices, the Bhubaneswar Development Authority (BDA) has now installed facilities of Open Air Gym at 26 parks across the city.

Nearly two years ago, the city had started with one such facility at Buddha Jayanti Park, which later became five and extended to 15 parks in 2017.

In view of the huge popularity of the open air gyms in parks, the city authorities have now added open-air gym facilities in 11 new parks spread across the city.

Among the three Smart Parks created in Saheed Nagar, BDA-OMC Park also has the Open Air Gym facility in order to give the people of Smart District more smarter and healthier alternative to keep themselves active and fit.

The development authority had introduced the Open Air Gym concept in the city to instill the daily exercising plan in everybody’s lifestyle as most of the citizens were not active physically, but after the spread of this concept there has been a dramatic rise in the footfall in the park and people from all walks of life are using the equipment and stay healthy.

It can be mentioned here that Urban Development Minister Pushpendra Singh Deo on the occasion of the 33rd foundation day of BDA, inaugurated the first Open Air Gym facility on September 1, 2015, at Buddha Jayanti Park in Niladri Vihar.

Later in the same year, Biju Patnaik Park near Capital Hospital, Kelucharan Park near Netaji Subhash Enclave, Gadakana, Madhusudan Park at Pokhariput and Kharavela Park near Khandagiri-Udayagiri caves were added to the list.