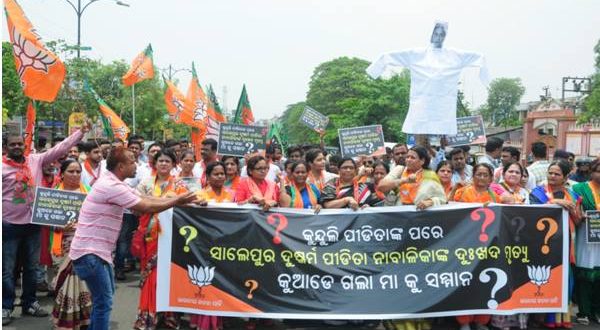 Bhubaneswar: The Odisha unit of Bharatiya Janata Party (BJP) on Monday staged a demonstration demanding justice for the family of the five-year-old minor rape survivor of Salipur who died on Sunday after battling for life for eight days.

The BJP activists staged a demonstration at the Ram Mandir Square and burnt the effigy of Chief Minister Naveen Patnaik demanding his resignation and justice for the rape victim’s family.

On Sunday evening, the six-year-old minor rape survivor of Salipur area died after battling for life for eight days. The girl died while undergoing treatment at the SCB Medical College and Hospital in Cuttack.

The survivor has been on ventilator support since April 21 night when she was admitted to the hospital after being rescued in an unconscious state from a school verandah of Jagannathpur village.

The survivor was raped, strangulated and left on a school campus at Jagannathpur village in Cuttack district on April 21 by a 25-year-old man of the same village, with the accused presuming her to be dead.

Meanwhile, the Chief Minister announced Rs 5 lakh compensation to victim’s kin and assured stern punishment to the accused on the floors of the Assembly on Monday.