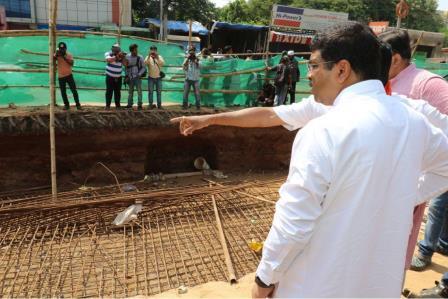 Bhubaneswar: Union Petroleum Minister Dharmendra Pradhan on Saturday came down heavily on the Odisha government for showing favouritism to the blacklisted construction company Panda Infra, which is constructing the flyover at Bomikhal in Bhubaneswar.

A portion of Bomikhal over bridge collapsed on Thursday night killing a worker and injuring another.

Pradhan, who visited the accident spot, blamed the state government’s alleged inefficiency for the Bomikhal flyover mishap for the second time after a span of some months.

He wanted to know why a black-listed company was asked to resume the flyover work and demanded that a proper investigation should be conducted and culprits should be punished.

He also requested the state government for an impartial probe and corrective measures by reliable agencies like IIT Chennai having experience and expertise in civil engineering.

He urged the Chief Minister to take strict action against the guilty rather than being hand in glove with them.