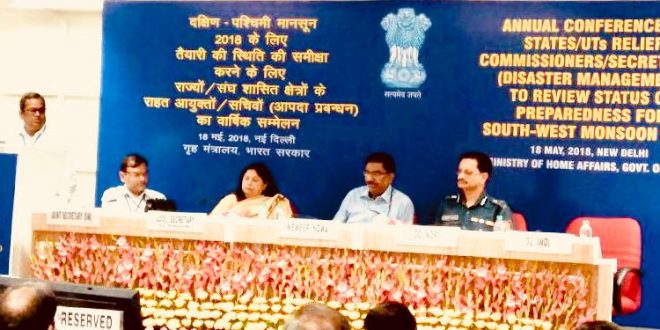 New Delhi/Bhubaneswar: The Odisha government has shared its best disaster management practices with the Centre so that other states can benefit from its experiences.

Special Relief Commissioner and Disaster Management secretary Bishnupada Sethi made a presentation on best practice of handling cyclone by the state in New Delhi on Friday.

Speaking at the annual conference of state relief commissioners and secretaries in the national capital, Union Home Secretary Rajiv Gauba asked all state governments to be prepared for handling natural disasters which caused around 2,200 deaths and financial losses worth about Rs. 60,000 crore per annum during 2005-14.

Pertinently, mostly the damages were caused by floods.

Earlier in April, the Department-related Parliamentary Standing Committee (DPSC) on Home Affairs appreciated the Odisha government’s efforts for shifting its focus from mitigation to management of cyclone of 2013 and 2014 after the devastation caused by 1999 Super Cyclone.

In its 195th Report, on the “Devastation caused by Natural Disaster, Hudhud Cyclone in Andhra Pradesh and Odisha”, the Committee observed that various organizations like National Disaster Management Authority and World Bank appreciated the efforts of the Odisha government that while in 1999 Super Cyclone, the state was a victim, in 2013 and 2014, the state successfully shifted its attention from “mitigation” to “management”.

The Committee had commended the Government of Odisha for their outstanding work and hoped that other disaster-prone states should learn from Odisha’s experience in the matter of preparedness and disaster management to meet any eventuality.

The Committee had requested Odisha to share its experience on preparedness and disaster management to the other disaster-prone coastal states to mitigate its impact on people and community.