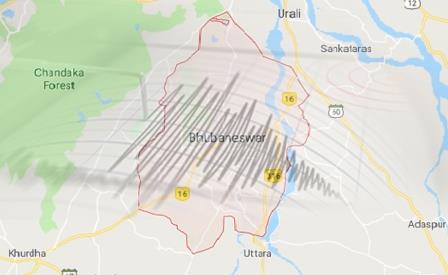 Bhubaneswar: A team of experts from the Ministry of Earth Sciences has started the initial survey to do a seismic micro-zonation mapping for the entire Bhubaneswar Development Plan Area (BDPA).

Bhubaneswar is a leading city in the country to be taken for such a survey by the Ministry.

To facilitate the survey, the state government has formed a committee under the chairmanship of Vice-Chairman BDA, so that the seismic (related to earthquake) mapping of the entire plan area under BDA jurisdiction would be done effectively.

The high-level team has also members-ADM, Bhubaneswar, a member from IIT Bhubaneswar, City Engineer, BMC and a senior official from the Science and Technology Department.

A primary meeting was held in BDA where the initial planning was chalked out. Further meetings will be held to facilitate the team from the Ministry of Earth Sciences to conduct the detailed survey works smoothly.

For example, the team might need to enter a premise or compound to do the study as they have taken some 1100 odd points from the entire BDPA area after dividing the plan area into a grid.

It can be mentioned here that the BDPA area is in Seismic Zone-III, but now the risks are multiplied with two possible fault lines passing through the geological area.

This study will be immensely beneficial for the city, as it will be a guiding factor to regulate construction activities and from disaster management and preparedness point of view.