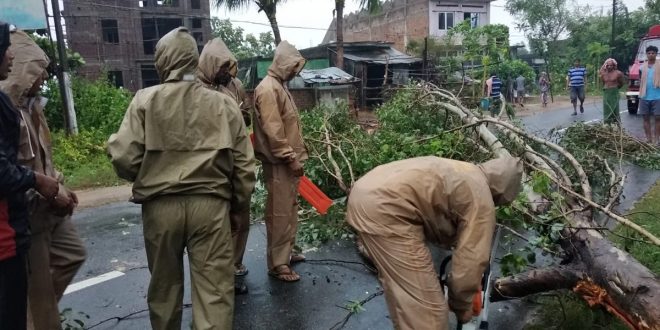 Bhubaneswar: The severe cyclonic storm Titli has left Gajapati district virtually cut off from the rest of Odisha.

The cyclonic storm caused severe disruption in road communication and telecommunication across all the blocks while power supply has also been disrupted.

Chief Secretary A P Padhi said the government was expecting Ganjam district to be more affected, but it was Gajapati which bore the brunt.

“The cyclonic storm has caused maximum damage in Gajapati district. Uprooted trees obstructed the communication system. The damage in Ganjam district is less what has been anticipated,” said Padhi.

He said two more NDRF teams have been sent to Gajapati to carry out restoration work. On e NDRF team was already in the district.

Padhi said the district received over 200 mm of rainfall.

Heavy rainfall was still continuing with wind speeds recorded at over 100 kmph. He also said there was a flood like situation in the Vansadhara river system in Rayagada and Gajapati districts.

Padhi said Chief Minister Naveen Patnaik, who took a review meeting on the cyclone situation, directed that the situation is restored as soon as possible.