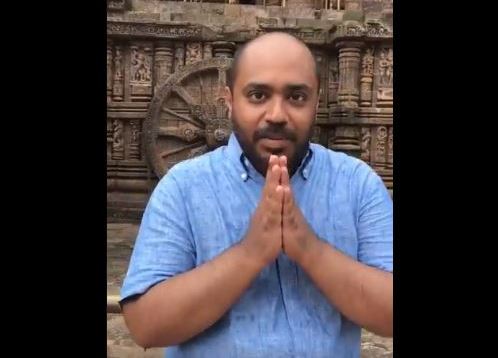 Bhubaneswar: Security analyst and columnist Abhijit Iyer Mitra was on Tuesday arrested for his derogatory remarks against Odisha and its culture.

The Commissionerate Police arrested Abhijit after interrogating him for hours at an undisclosed place in Bhubaneswar.

The Saheed Nagar police arrested him following a complaint filed by one Manoranjan Swain. Basing on the complaint, the police had registered an FIR on several sections including inciting religious sentiments, derogatory remarks and defamation.

Abhijit will be produced before the court after medical examination, said police.

Earlier on Tuesday, Ayer Mitra had appeared before the house committee of Odisha Assembly and sought apology for derogatory remarks on legislators.

The house panel headed by leader of opposition Narasingh Mishra asked Abhijit to re-appear on November 2 and submit an affidavit.

Notably, Abhijit had on September 16 posted a video on Twitter in which he was seen criticising the Konark temple. Later, he went on making alleged defamatory remarks against Odisha and its culture.

Two FIRs have been registered against Abhijit at Konark and Saheed Nagar police stations for his defamatory remarks against Sun Temple, Odisha and its culture.