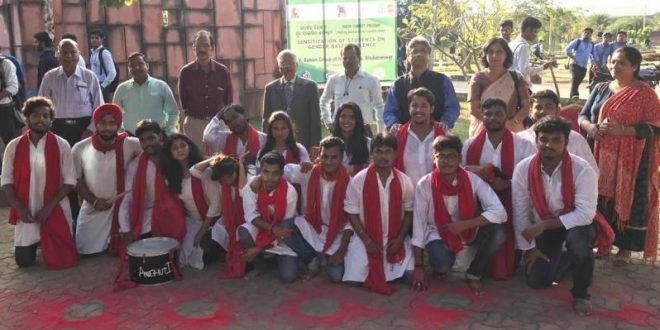 Bhubaneswar: A programme was organised today at CV Raman College of Engineering to create awareness amongst students on issues of gender-based violence.

This is the fourth event organised this year in collaboration with Bhubaneswar Smart City Limited (BSCL) and United Nations Population Fund (UNFPA) under the Youth Connect programme.

“The programme is planned to help students to understand various dimensions of gender-based violence and become aware of their rights n privileges which in long run is very important for them,” said BK Mishra, who is the nodal officer for the programme.

BSCL has collaborated with UNFPA to strengthen the social components of Smart City Proposal. The project is being implemented at the level of educational institutions and slums of Bhubaneswar Town Centre District (BTCD) area and beyond in the city.

This year, colleges have gone beyond the one-day programme and have taken steps to involve students in various other programs and competitions to create a better understanding amongst students on the issue.

Around 40 programmes have already been organised in the year. In the coming days, programmes are also planned to be organised at school-level including both government and private schools in the city.

She also made them aware of few acts including Sexual Harassment at Workplace and Domestic Violence Act etc.

The BSCL-UNFPA programme is about to change the social fabric under the Smart City initiative by organising programmes for the slum dwellers under BTCD and especially considering the adolescent girls, women and elderly.

The Youth Connect Programme centres on educational institutions and sensitising the young minds on several burning topics like overuse of Internet leading to suicidal video games, drug abuse and understanding the gender divide and respecting the opposite sex.