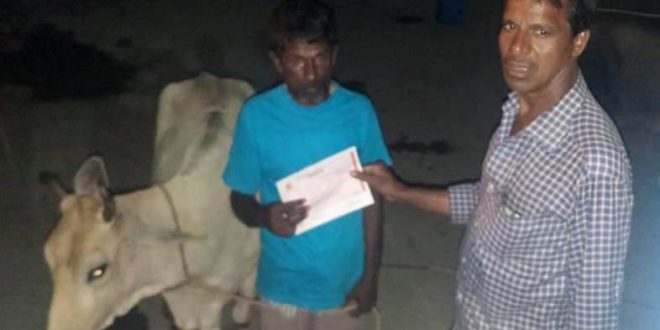 Bhubaneswar: The ear tagging of cattle inside Bhubaneswar Municipal Corporation (BMC) area has started giving results as two cattle were captured by the cattle squad from Bhimpur area near the Biju Patnaik International Airport and kept in the kine house of the civic body at Kharvel Nagar.

Later, the owners of the tagged cattle deposited Rs 1,000 fine each for their animals and took away the cattle.

As the tagged cattle are easy to be traced, their owners were called so that they would not be burdened with more fine. They were also asked not to let their cattle roam around in future and also make aware other people in their vicinity follow the same.

The incident also proves that the citizens of the city have started accepting the rules on the bovine management and also leaflet distribution, tableau, house inspection, awareness creation and airing of radio jingles have impacted the society so that before the WCH the city would be better and beautiful.

It can be mentioned here that after tagging if a cattle is found roaming here and there and on the city roads and is caught by the cattle catching squad of BMC, then the owner has to pay Rs 1,000 for the release of the animal.

In the case of untagged cattle, the owner has to pay Rs 1,500 as a fine. There would also be additional daily fine on the cattle.

On October 30, BMC launched a programme for ear tagging of cattle at Behera Sahi, near Kalinga Stadium. The programme was jointly executed by BMC and Fisheries and Animal Resources Development (FARD) Department.

Awareness vehicles were also launched on this occasion. With the ear tagging cattle owners could also identify their animals during any natural calamity, theft and illegal transportation of the animals through the traders.

BMC Deputy Commissioner Subhranshu Mishra said, “The awareness drive by BMC in association with FARD is making people responsible to rise to the occasion so that the city roads would be better before the World Cup Hockey.”

The ear tagging of cattle is done by attaching a soft plastic number given by BMC to the cattle. As the ear is made of cartilage the piercing of the needle with the numbered tag would not be painful for the animal.