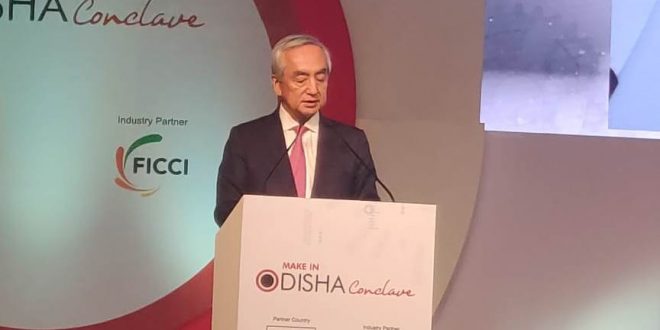 Bhubaneswar: A Japan seminar was held at the Make in Odisha Conclave 2018 here on Monday laying foundations of a formidable partnership between Odisha and Japan for providing sustainable growth for the citizens of the state through various projects and partnerships.

“We have identified 665 acres of land for the Japanese organization to set up their business infrastructure in Odisha, which is just 20 km from Bhubaneswar. We also thank the Japanese delegation members who have come to this summit and extended their support for the development of Odisha,” he said.

Japanese Ambassador to India, Kenji Hiramatsu said, “We appreciate the interest of Odisha to work with Japan and showcasing their warm welcome towards Japanese organizations. Many state missions from Odisha have visited Japan and highlighted the opportunities which state has to offer to the Japanese companies. We are looking forward to expanding our partnerships Odisha and we can work on several sectors to boost a collaborative business effort.

Odisha can also assist Japan to fill up some gaps in certain industries such as seafood industry, how Japan can get sufficient amount of prawns for Japanese consumers as Odisha is one of the prime exporters. Again we thank you all for extending such a warm welcome to Japan and allowing us to be a partner country for this summit.”

There were two panel discussions, which were presided over by various participants representing Japanese organizations.

Yoshiomi Yoshino, Senior Representative, Japan International Cooperation Agency (JICA) said, “In Odisha, till date, JICA has assisted 13 projects in the fields of Water and Sanitation, Agriculture, Power and Forestry. All together JICA has provided an Official Development Assistance (ODA) loan assistance, which amounts for 160 billion Japanese Yen (approximately INR 9,200 crores) for the development of various sectors in Odisha.

JICA’s support to the power sector for substations and transmission lines across Odisha has enhanced the stability of the power system and reliability of power supply and reduce transmission loss in the state. In the agriculture sector, JICA has helped increase the production of agriculture and improve the living standard of farmers through the Rengali Irrigation Project. JICA’s assistance to the Forestry sector in Odisha has enhanced forest ecosystem along with sustainable livelihood of local people by improving sustainable forest management.

JICA has also assisted to improve sanitation and rainwater drainage facilities in Bhubaneshwar & Cuttack. Also, JICA has also deployed a young Japanese volunteer in Bhubaneswar as a special coach for rugby so as to enhance people to people exchange for deeper mutual understanding.”

In the second panel discussion, participants from other Japanese organizations spoke of human skill development assisted by these organizations in India. Kaoru Miyamoto, Director-General, Japan Foundation and Natsuki Morikubo, Business Head Japan, ASMACS spoke of their work in India.

The five-day event will conclude on Thursday, November 15.