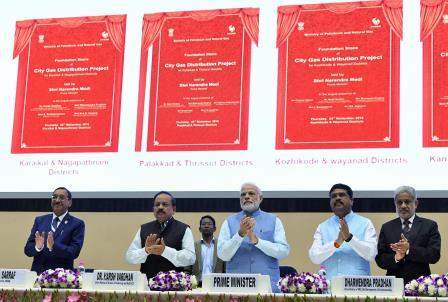 Modi said India has to achieve the dream of the gas based economy or to produce clean and safe fuel.

“Not only for self, but it is also needed for the entire society and particularly for the next generation. We are committed to fulfil this dream and it is our responsibility to reach our goal,” said the PM.

On this occasion, Pradhan said, “Our PM has envisaged ushering a gas-based economy along with Swachh Bharat. Our Prime Minister is committed to generate employment for the youths of our country and for the development of the nation.”

Speaking on this occasion, Oram said through City Gas Distribution, the cities will get the safe and environment-friendly and pollution-free fuel, which will keep women healthy and safe.

Earlier women in the family had to depend on booking of cylinders, its storage for domestic kitchen. But now they will get PNG through pipelines directly in kitchens.