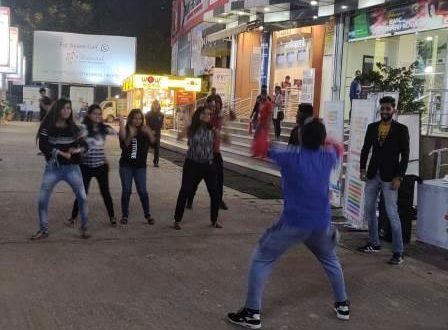 Bhubaneswar: In order to inspire the youth and the happening public of the city, for greater participation in the coming Bhubaneswar City Festival (.FEST), the Bhubaneswar Development Authority (BDA) today started a high octane outreach campaign near select city malls.

The youth volunteers performed Zumba dance near BMC Bhawani Mall and Central Mall in Saheed Nagar and Pal Heights in Jaydev Vihar. The public near the performances were also got inspired by the spark of the outreach initiative and joined the Zumba groups with a musical dancing treat.

While today Zumba was the centre for attraction, from tomorrow flash mob, street plays would also be added to make the campaign more attractive.

Member Enforcement BDA Bhabani Shankar Chayani, who is coordinating the outreach programme for the upcoming Bhubaneswar City Festival, said the city has already opened 11 counters to sale the tickets for the .FEST through bookmyshow.

“While in Ekamra Haat there are four offline counters, at BMC-Bhawani, Esplanade, Central, and Pat Heights Malls there are one each. In other places like KIIT University, SOA University, Market Building there is one counter each,” he added.

It can be mentioned here that on the lines of the previous mascot campaign during the Asian Athletic Championships-2017, BDA has taken up this initiative today as it is jointly organising the unique festival with Odisha Tourism, for the first time in the Temple City. The programme for the citizen outreach will continue till December 1.

Sources also said that there will also be one counter in Cuttack at Bali Jatra Ground to attract visitors from the Millennium City.

The Bhubaneswar City Festival or .FEST, as it is called, would have an exclusive dose of music, entertainment, performances, dance recitals and story-telling sessions. Mega stars of Bollywood and India’s entertainment industry are all set to come and join the bandwagon for the spectacular performances. This festival will start on December 1 and continue till December 16.

Music composure Vishal and Shekhar would be performing with their High Octane theme as the inaugural curtain raiser event on December 1. There would be various folk, martial and tribal dances performances by dance groups from across the country. While Folkscape.FEST will include Chhau, Sambalpuri, Bihu, martial dances like Gotipua from Odisha and Kalaripayattu from Kerala, Classical night named Classical.FEST will be curated by noted Odissi dancer, composer and Guru Padmashri Aruna Mohanty.

Music composer Shankar-Ehsaan-Loy will blow away the minds of the Bhubaneswarites with their scintillating performances on the closing day of the event on December 16. The entertainment extravaganza would be part of the main venue at IDCO Exhibition Ground at Unit III in Bhubaneswar, which would be near to the venue of the International Food Festival showcasing continental, national and local cuisines primarily street food items. This event will have several theme-based decorations as per the day’s performance and artists present on the dais.