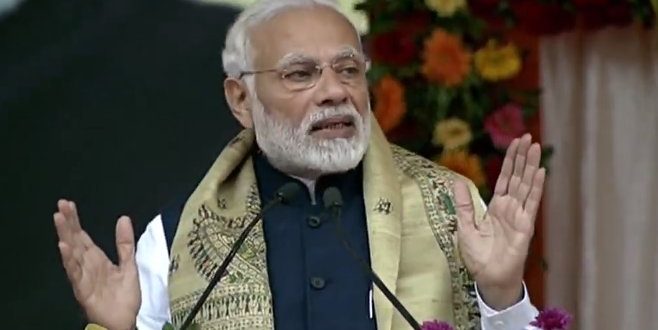 
Baripada: Prime Minister Narendra Modi inaugurated and laid foundation stones a slew of projects worth over Rs 4,500 crore during his visit to Odisha’s Baripada on Saturday.

The Prime Minister also inaugurated doubling of Naranpur-Basantpur and Chillikidara-Sagadapata line that will connect mineral rich Keonjhar and Jajpur districts.

He flagged off the second passenger train from Tatanagar to Badampahar.

He also laid the foundation stone for the four laning of various National Highway projects and inaugurated six passport sevakendras.

The Prime Minister unveiled plaque to mark the commencement of work for the development and conservation of Rasika Ray temple at ancient fort, Haripurgarh.

The Prime Minister began his address with New Year good wishes to the people of Odisha.

He said this Balasore-Haldia-Durgapur section of IndianOil’s Paradip-Haldia-Durgapur LPG Pipeline will ensure uninterrupted supply of LPG cooking gas to lakhs of people of both the state Odisha and West Bengal.

Along with this, new job opportunities will be created with the commencement of this new pipeline project, he added.

Development of infrastructure and permanent changes in the lives of human being are the testimony of development in a state. This continuous process of development will benefit the people at a large. All round development of the Eastern India is our commitment, said the Prime Minister.