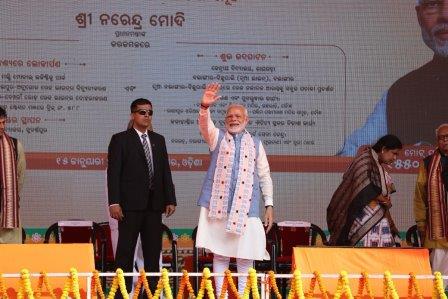 PM Modi launches projects worth over 1,550 crore in Odisha

He said they would play a key role in accelerating the state’s development.

“I am happy to unveil projects worth Rs 1,550 crore in areas like education, connectivity, tourism and culture,” said Modi.

He dedicated the Multi-Modal Logistics Park (MMLP) in Jharsuguda to the nation.

The MMLP is built at a cost of Rs 100 crores. It will facilitate EXIM and Domestic cargo including Private Freight Traffic. The Multi-Modal Logistics Park will establish Jharsuguda as a prime logistics hub in Odisha and boost ease of doing business in the State.

He also inaugurated the electrification of Jharsuguda- Vizianagaram and Sambalpur-Angul lines spanning 813 km completed at a cost of Rs 1,085 crore.

Modi also inaugurated the doubling of 14.2 km of Barpali-Dungaripali and 17.354 km Balangir-Deogaon railway lines, completed at a cost of Rs 189.3 crore.  It is a part of the 181.54 km Sambalpur-Titlagarh rail track doubling project.

He also inaugurated the 15 km-long Balangir-Bichhupali ailway line laid at a cost of Rs 115 crore.

The 15 km Balangir-Bichhupalli New Railway Line would connect coastal Odisha with western Odisha synchronising development across the State. It will reduce travel time from Bhubaneswar and Puri to major cities like New Delhi and Mumbai.

The line would benefit many MSME and cottage industries in Odisha and open up opportunities for the mining sector in Odisha.

Modi also dedicated bridge no. 588 between Theruvali-Singapur road station. It will result in rebuilding of the linkage over Nagaveli river which was washed away during floods in July 2017.

The PM also inaugurated renovation and restoration works at Asurgarh Fort in Kalahandi. Asurgarh figures as an important political and commercial centre in ancient texts.

In order to facilitate passport services and reduce the travel hassle for the people, the Prime Minister inaugurated New Passport Sewa Kendras at Jagatsingh, Kendrapara, Puri, Kandhmal, Bargarh and Balangir.

It will immensely benefit the people from these regions since they had to visit Bhubaneshwar for passport related services.

Modi also laid foundation stone for permanent building at Kendriya Vidyalaya in Sonepur. The building will house modern schooling facilities for the benefit of over 1000 school children.