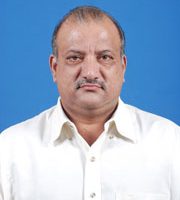 According to sources, BJD is planning to allocate the Morada party ticket to Das.