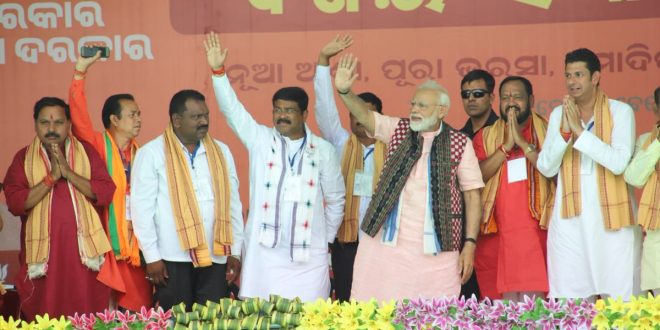 “How can they (BJD) think of common people when all they do is to protect those involved in chitfund and mining scams,” asked Modi while addressing a rally at Sambalpur.

He said it is the Modi government that amended decades-old mining law and ensured that a part of the fund from the resources extracted is utilized for the development of local infrastructure.

“It is the result of the earlier corrupt and weak governments that the people of Odisha remained poor after so many years of Independence. Discrimination on the basis of region and caste are the only achievements of Congress and BJD,” said Modi.

Informing that the KALIA scheme being implemented by the state government is mired in corruption, he said the BJD failed to provide list of farmers to avail the benefits under the Pradhan Mantri Kisan Nidhi Yojana.

Modi said once the BJP forms government at the Centre, it will set up separate fisheries and ‘jal shakti’ ministries.

“The jal shakti ministry will end the water crisis in the country by ensuring that water from the rivers and the seas reach the poor and the needy,” he added.

Sambalpur Lok Sabha seat will go to polls in the third phase on April 23.