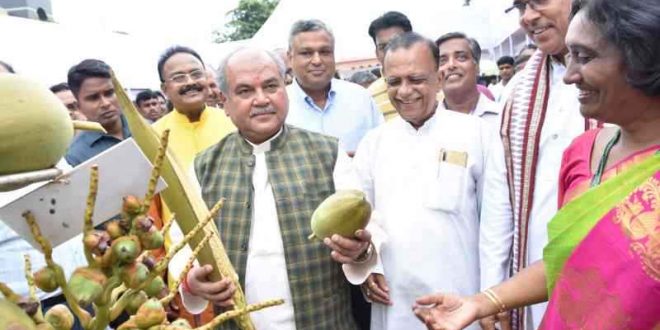 Around 700 farmers from across the country participated in the technical session and valedictory session held as part of the programme.

Union Agriculture Minister Narendra Singh Tomar said that while Prime Minister Narendra Modi has announced that 10000 Farmer Producer Organisations (FPOs) will be formed in the country, the coconut farmers have already benefited by the formation of FPOs.

He shared his happiness in bringing thousands of farmers under the umbrella of the FPOs in the state of Odisha.

He called upon the farmers of the state to work hard in the wake natural calamities that occur frequently in the state.

He informed that CDB has allocated around Rs 29 crore for the farmers of the state who are affected by the recent cyclonic storm Fani.

The government is committed for the development of coconut cultivation, processing and value addition.  Coconut Development Board is playing a major role in the implementation of the same, the Minister said.

Around 490 units are already functioning in the country with the financial assistance of the Board which has to be doubled by 2020. Coconut is having high prospects in value addition and an array of products can be developed from coconut.

Board is also playing a commendable role in undertaking skill development programmes and thereby generating employment opportunities in the sector.

The Minister appreciated the state for occupying a prominent position in the coconut map of the country and he offered all possible cooperation and assistance of the Government of India for the welfare of the farmers of the country.

He emphasized that special care to be taken to resolve their heavy loss.

He called upon the farmers to ensure that their crops are covered under crop insurance.

He requested to implement available schemes of CDB in the state of Odisha.