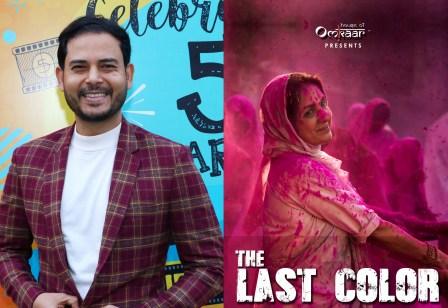 The Academy of Motion Picture Arts and Sciences has announced a list of 344 feature films from across the globe eligible for the Oscar 2019 best picture (2019 Academy Awards).

To be eligible for the consideration, the films must open in a commercial motion picture theater in Los Angeles County by December 31, and begin a minimum run of seven consecutive days.

Nominations for the 92nd Academy Awards will be announced on Monday, January 13, 2020. The ceremony takes place on Sunday, February 9, 2020.

‘The Last Color’, which also marks Vikas Khanna’s debut as a Director and screenwriter, is based on his bestselling book by the same name.

Set in the beautiful city of Varanasi, this is the story of Chhoti, a nine-year-old flower seller and tightrope walker who befriends Noor, a 70-year-old widow living a life of complete abstinence.

Chhoti promises to bring a ray of hope in the life of Noor. The film has been produced by Jitendra Mishra , Bindu Khanna & Poonam Kaul under the banner of “House Of Omkar”.

As of now the film has already been selected in more that 50 international film festivals and received more than 15 different awards and nomination in various categories.

“It doesn’t matter if we make it to the final on not but It’s indeed a reason for celebration as there are only few films from India get eligibility to be in the contention list. The film has already been travelling across the globe winning hears and this would be another milestone I believe.” Jitendra Mishra said on this occasion.

Born in Titlagarh, Odisha, Jitendra Mishra is one of the few Indian film Producers & promoters who have been able to create a benchmark in ‘Alternative method of Film Production, Distribution & Promotion’ at international level.

Committed towards meaningful cinema, Jitendra has been associated with socially relevant films made for young audience.

He has already been associated with the production, distribution and promotion of more than 110 films in all categories. Many of them have got worldwide acclamation and recognition.

Awarded with the prestigious ‘Son of Odisha’ (Odia Pua), ‘Young Jury, ‘Youth Icon’, ‘Youth inspiration’ & many other awards, Jitendra Mishra is also an elected Board of Director for the most credible and oldest children & youth media network CIFEJ, an active member of the Cannes producers’ network Jitendra has also been selected as Jury for more than 25 leading international film festivals & forums.

Only lights to go off, not all other appliances: Odisha govt

500 MBBS students get training for COVID-19