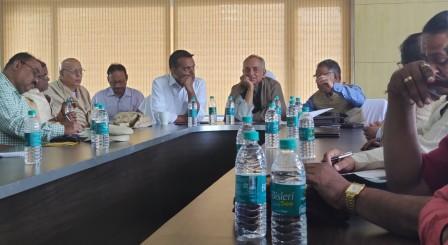 
Puri: The Odisha government would finalise the draft architectural plan of Puri Heritage Corridor Project by the first week of April, said an official on Tuesday.

It was decided at the first preparatory meeting presided over by Puri Gajapati Maharaja Dibyasingha Deb here on Tuesday.

Chief administrator of Shree Jagannath Temple Administration (SJTA) Krishan Kumar said the blueprint of this heritage corridor project will be finalised either by the last week of March or the first week of April.

Kumar said the upcoming heritage corridor plan will not alter or change existing rituals or practices of Jagannath Temple.

“Today we had a focused discussion with all the stakeholders about the Heritage Corridor plan. The concerns of the affected families and all the stakeholders were heard and discussed. We will form a small team to asses and analyse all of the suggestions and how to incorporate them in the Plan,” said Kumar.

All Concerns Have Been Taken Care Of

The families residing close to Puri Temple as well servitors had anticipated that once the structure in front of the Temple is completed, then they would not be permitted to perform one of the practices of Last Rites which involves exhibiting the deceased body in front of the Puri Temple.

Dr Kumar stated that the families will be allowed to continue the practice as has been for last many years.

Similarly, the servitors of temple had anticipated that because of the beautification structures in front of the Temple, there would be difficulty in performing many rituals of Ratha Yatra and other festivals.

Dr Kuamr assured them that these traditions and rituals will be taken into account while constructing the proposed structures.

Dibyasingha Dev, Chairman, SJTA suggested that the upcoming structure must include place for Janja ritual performance for incoming devotees.

Padmashree and sculptor Raghunath Mohapatra who participated in the discussion, stressed that the new structures must include sculpting practices of ancient Utkal.

In the meeting, the parties concerned were assured that their issues have already been taken care of in the Heritage Corridor Design and if possible, the State Government would again held such discussions to address their concerns.

In the meeting at the Conference Hall of Odisha Bridge and Construction Corporation Limited (OBCCL), a Government of Odisha undertaking, a proposal to construct a Maha Prasad Dining facility was proposed.

Speaking on the dining facility, Kumar said, “The state government wants to construct a dining area, where at least 5,000 persons can have Mahaprasad everyday.”

Representatives from Bhumiputra organisations made a presentation to the key government officials and related stake holders in the discussion held on Tuesday.