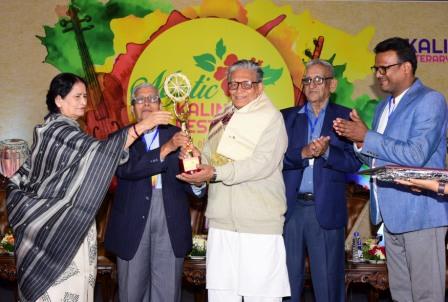 
Bhubaneswar: In the fourth edition of the two-day long Mystic Kalinga Festival (MKF), Manoj Das, who was recently conferred with Padma Bhushan Award for his outstanding contribution to English and Odia literature, received Mystic Kalinga Literary Awards-Indian and Global Languages.

Mystic Kalinga Literary Award carries a cash prize of Rs one lakh along with a khadi shawl and certificate for the laureate.

Mystic Kalinga Literary Award has been instituted to recognize and celebrate  prolific and inspiring writers, poets and performers.

Das also presented a talk on “Divine Madness: Knowledge, Ecstasy, and Transformation”, the central theme for the fourth edition of the Mystic Kalinga festival.

He mentioned that he is in the process of translating ‘Savitri’, the epic poem written by freedom fighter and spiritual guru Aurobindo Ghosh into Odia.

Presenting the award, Mystic Kalinga Festival Founder and President Rashmi Ranjan Parida said, “Manoj das is an inspiration to not only budding writers, but also his contemporaries. Hope his contribution will influence future writers.”